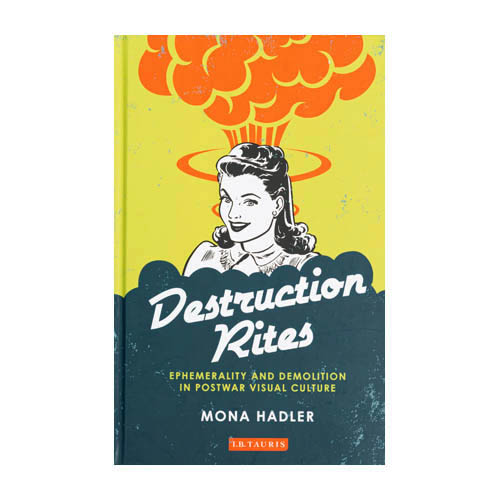 In the early sixties, crowds gathered to watch rites of destruction – from the demolition derby where makeshift cars crashed into each other for sport, to concerts where musicians destroyed their instruments, to performances of self-destructing machines staged by contemporary artists. Destruction, in both its playful and fearsome aspects, was ubiquitous in the new Atomic Age. This complicated subjectivity was not just a way for people to find catharsis amid the fears of annihilation and postwar trauma, but also a complex instantiation of ideological crisis-in a time with some seriously conflicted political myths. Destruction Rites explores the ephemeral visual culture of destruction in the postwar era and its links to contemporary art. It examines the demolition derby; games and toys based on warfare; playgrounds situated in bombsites; and the rise of garage sales, where goods designed for obsolescence and destined for the garbage heap are reclaimed and repurposed by local communities.
Mona Hadler looks at artists such as Jean Tinguely, Niki de Saint Phalle, Martha Rosler and Vito Acconci to expose how the 1960s saw destruction, construction and the everyday collide as never before. During the Atomic age, whether in the public sphere or art museums, destruction could be transformed into a constructive force and art objects and performances often oscillated between the two.